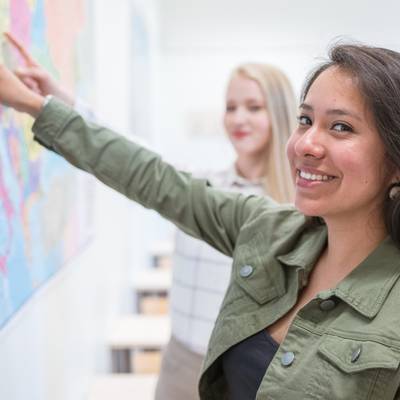 Narva College of the University of Tartu has taken a step forward after years of hosting international summer schools on the Russian language and opened a new Russian-language master’s curriculum to educate teachers of Russian as a foreign language.


The new master’s curriculum “Teaching Russian as a Foreign Language” was prepared at the end of last year and now admission of students to the programme has started. According to Marek Sammul, Director of Narva College of the University of Tartu, the new curriculum is a continuation of the long-term international continuing education programme, in which groups from the USA, France and United Kingdom have participated.

“The master’s curriculum is mostly directed to international learners, to whom Narva offers a possibility for professional development in a safe environment in the European Union, but in a Russian-speaking environment, and instruction by excellent teaching staff in one of the best universities of Europe. I believe that a Russian teacher’s career can also be of interest in Estonia,” said Sammul.

Director of Academic Affairs of Narva College Ingrid Vetka envisions two major groups of international students as learners: firstly, students from Russian-speaking countries to whom the curriculum gives an opportunity to access the EU labour market, and secondly, students from Western countries who in their home country cannot get language instruction at the necessary level to qualify as Russian teachers.

Vetka assures that the curriculum also offers opportunities to learners from Estonia. “Mostly to students whose native language is Russian, because there are relatively few possibilities in Estonia to get higher education in Russian. If a student wants to go to work in Estonian schools and acquire the qualifications required to work as teacher in Estonia, we can offer them additional courses for a fee: intensive Estonian language programme, followed by the basic teacher training module in Estonian,” said Vetka.

The new curriculum differs from the existing ones in that it specialises in teaching the Russian language, and does not involve teaching Russian literature. “The existing Russian language teaching programmes in Estonia are targeted to the local market and are mostly tuition-free,” explained Vetka. Narva College aims to offer student-funded education in a foreign-language programme to increase opportunities for international students.

Previous education in Russian philology is not required for admission to the programme.